Imperial Wealth - Where to Play in NJ 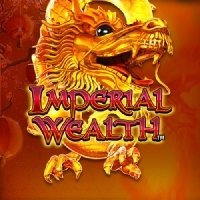 Play this game now at:

This page shows information about the availability of Imperial Wealth in the state of New Jersey.

For other states, choose your preferred location with the selector at the bottom of the page.

This chart shows how the number of casinos offering this game in NJ has changed over time.

Chinese lanterns and fierce glowing dragons come together in this Asian-themed video slot from game developer Konami. Bet limits start at $0.45, which pays for all the paylines.

This game features a common video slot layout with 5 reels and 30 paylines. The symbols are drawn from Chinese culture, and when they appear in bunches via the popular "Action Stacked Symbols" feature, big wins are to be expected. The most valuable symbol is the glorious Chinese dragon, which can return up to 500 times your bet on each payline. 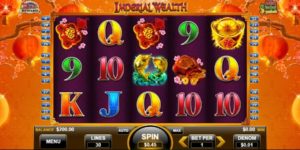 Other icons in Imperial Wealth include a whimsical golden fish symbol, the playing card ranks from 9 to Ace, and a couple of additional Asian-influenced symbols that are hard to characterize. All I know is that you want them all lined up, whether you can identify them or not!

The main bonus feature of this game is quite an innovation, despite its humdrum name of "Lucky Frames". Allow me to explain with some screenshots.

Each reel on the slot includes empty golden frames around some spots. Before each spin, a symbol is randomly chosen to fill every one of the golden frames. For example, in this spin, the symbol "9" fills every golden frame. I drew white circles around them to emphasize the frames. 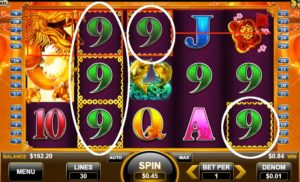 Most of the symbols are eligible to be selected to fill the frames. Here are the rules about that:

The exciting part of this feature happens when you end up with golden frames showing on at least 3 of the 5 reels, like in the example screenshot above.

Several things now happen at once...

What this means in practice is that a seemingly minor spin like the one I pictured above can turn into a monster win. Let's see what happened on my spin... 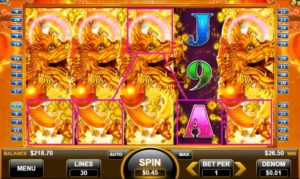 In my case, a minor 84 cent win involving "9" symbols has been transformed into a $26.50 win with 4 reels filled with dragons. Not bad!

This game can deliver surprises around every corner and that makes it really fun to play.

The full details of the bonus feature are explained here:

Events in the game history are listed with the most recent activity at the top of the list.

Each event line indicates that a casino added or removed Imperial Wealth from their inventory on that date.

You may notice that some casinos drop and re-add the same game multiple times, sometimes on the same day. This happens occasionally when a new game is being launched or updated.

See something unusual? Our game history listings are based on our best effort to accurately track the constantly changing inventory of the casinos.

In particular, when we initially begin tracking a casino, the events generated may not reflect an actual change at the casino.

NOTICE: Casino links are intended for players age 21+. You must be physically present in New Jersey to wager.
Not in New Jersey?
© 2021 Bayview Strategies LLC