Monopoly Bring the House Down - Where to Play in NJ 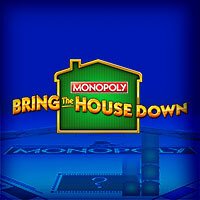 Play this game now at:

This page shows information about the availability of Monopoly Bring the House Down in the state of New Jersey.

For other states, choose your preferred location with the selector at the bottom of the page.

This chart shows how the number of casinos offering this game in NJ has changed over time.

Monopoly Bring the House Down

The Monopoly franchise just keeps growing. In the New Jersey market, you'll find many variations on the theme. A few examples are: Monopoly Big Event, Epic Monopoly II, and this version Monopoly Bring the House Down.

That seems appropriate since the street names in the board game were derived from streets in Atlantic City, many years before casino gambling came to the boardwalk.

This 40-line video slot from publisher Barcrest holds five reels with four symbols on each. 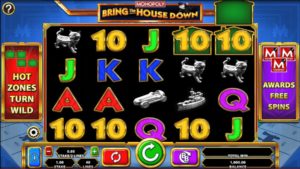 The symbol set features four popular Monopoly game pieces, the dog, the cat, the car, and the battleship. The playing card values from 10 to Ace also appear. But the action here is in the wild symbols, which work a little differently than most slots.

You probably remember from playing Monopoly that the little plastic houses in the game are green, and the hotels are red. Your goal in the board game is to stack up as many expensive hotels as you can on the most lucrative Monopoly properties like Park Place and Broadway.

Well, this game doesn't work like that at all, but the little green houses and red hotels do figure prominently in the game. 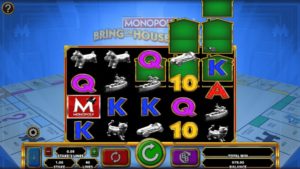 On this spin, you can see some green house symbols that appear above some of the reels. This superimposed set of "Hot Zone" symbols can land on top of the normal symbols and wherever a green house lands, the symbol becomes a wild.

On some randomly selected spins, the green houses don't just turn into wild symbols. Instead, they turn into red hotel symbols, which in addition to being wild symbols also apply a multiplier to all wins that use them. 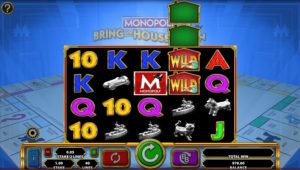 Catch three of the Monopoly logo scatter symbols on reels 1, 3, and 5, and you are awarded 8 free spins. 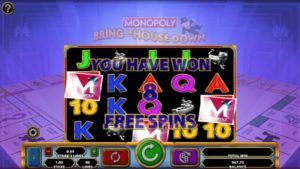 Any house or hotel Hot Zones that land during the free games become sticky, and persist until the free spins are completed. Although you cannot retrigger the free games during your bonus spins, you can sometimes accumulate quite a few sticky wilds along the way. 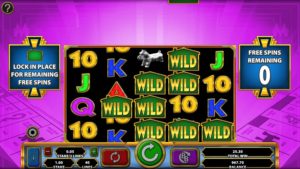 Another bonus feature that can be randomly triggered in this game is the Chance Cards bonus feature. The cards can appear before any spin, and allow you to choose one of three cards to reveal the result.

Each card holds a different layout for a Hot Zone that is guaranteed to land on the reels and deliver the usual wild symbols. 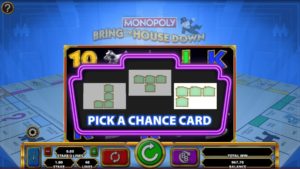 Like all of the Monopoly variants, this game includes a host of little extra features that add excitement. This one is my favorite in this game. The name sounds a bit boring: "Selector Feature". But this randomly triggered bonus round is anything but boring.

On some spins, you will be presented with a guaranteed Hot Zone of wild symbols, and you have just three seconds to decide whether to accept it or not. 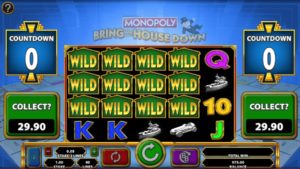 I wasn't quick enough in the screenshot, and let a really good offer get by me! If you do not click Collect, then you will often be offered another choice with a different hot zone. But not always! Sometimes the offer is actually the last one available, and will be awarded regardless.

As you can tell, the hot zone lies at the center of most of the bonus features, and this option is another way to trigger those wild symbols. On any spin where the green houses land above the reels, there is a chance that Mr Monopoly will appear and nudge them down to make them hit the reels anyway. That's called the Bonus Drop.

Like several other titles by developer Barcrest, this game offers yet another way to play. For a larger fixed bet amount, you can activate the Big Bet feature, which spins the reels five times (plus any free spins that may result), and awards the wins across all those reel spins. 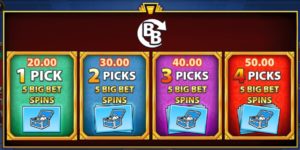 What you get for paying more in the Big Bet option is the ability to activate additional features during the spins. The features are hidden behind cards, and depending on your bet size you get to select from one to four of these extra options. 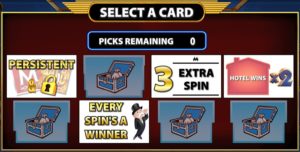 All of the features that you pick are combined, and are active for the duration of the spins.

Wow, there are a lot of different extras available during Big Bet spins. Here are the different kinds of features that can be activated.

Although the Big Bet options start at $20, they still offer the highest possible return in this game, over 98% according to the game help screens. And remember, you are buying at least five spins with that one larger bet. Just pay attention to your bankroll, as a cold streak can get expensive.

As usual, the Monopoly game philosophy seems to be that if one feature is good, then a dozen varieties must be even better! But for me, that's the charm of these Monopoly games. With all the different available options, you can play these games for a long time and yet still look forward to seeing some options that you have not yet encountered.

For me, this another winner in the Monopoly franchise, and you can find it at the casinos listed below. Our availability information is updated every single day!

Game History of Monopoly Bring the House Down in New Jersey

Events in the game history are listed with the most recent activity at the top of the list.

Each event line indicates that a casino added or removed Monopoly Bring the House Down from their inventory on that date.

You may notice that some casinos drop and re-add the same game multiple times, sometimes on the same day. This happens occasionally when a new game is being launched or updated.

See something unusual? Our game history listings are based on our best effort to accurately track the constantly changing inventory of the casinos.

In particular, when we initially begin tracking a casino, the events generated may not reflect an actual change at the casino.

NOTICE: Casino links are intended for players age 21+. You must be physically present in New Jersey to wager.
Not in New Jersey?
© 2022 Bayview Strategies LLC